Last week, Maariv and The Jerusalem Post published a column by EAJC Director General Dr. Haim Ben Yaakov. The article in English is provided below.

On July 8, a majority of the High Court judges (10 out of 11) rejected the petitions against the Basic Law: Israel as the Nation-State of the Jewish People, when Supreme Court President Esther Hayut, wrote in her ruling: “This Basic Law constitutes one chapter in our emerging constitution and it does not negate the character of Israel as a democratic state.”

The court ruled that equality between the Jewish character and the democratic character of the State of Israel is part of the emerging Israeli constitution.

On July 19, 2018, the law was passed by a majority of 62 votes as the 13th Basic Law of the State of Israel, but it continued to provoke a heated debate in the Knesset, in Israeli society as a whole and in Jewish communities around the world. Many petitions have been submitted to the Supreme Court, including a petition filed by 40 Israel Prize winners in the fields of culture, art and the spirit.

The law declares the exclusive right of the Jewish people to self-determination in the State of Israel, but critics of the law have argued that its wording is discriminatory against national minorities in Israel, as well as new immigrants who are not Jews according to the Jewish law. Petitioners argued that the wording of the Nationality Law does not include the idea of “complete social and political equality of rights for all its citizens without distinction of religion, race or sex” that is stated in the Declaration of Independence.

According to the ruling, the law will be construed as not depriving minorities of their recognized personal and cultural rights, while the value of equality not mentioned in the law is explicitly enshrined in the Constitution in three basic laws: the Law of Human Dignity and Freedom, the Law of Freedom of Occupation and the Law on the Knesset. Hayut emphasized, “Even before the establishment of the state, leaders of the Zionist settlement explicitly made it clear that the state to be established will ensure equality for all its residents… In the spirit of the same statements and principles, it is closely related to human dignity.”

Most jurists agree that the principle of equality is already defined in the Basic Laws and in the ruling of the High Court, so there is no need to repeat it in other laws, and the Nationality Law should not be seen as contradicting the values and intentions of the Declaration of Independence.

We emphasize that the Nationality Law also announces the intention of the State of Israel to absorb aliyah, to act “to preserve the cultural, historical and religious heritage of the Jewish people among Diaspora Jewry.”

These are essential things for the continuity of the Jewish people, but it seems that the public debate in Israel does not pay enough attention to these aspects, in particular from the perspective of the connection between Israel and the Diaspora and against the background of anti-Zionist movements.

Various national minorities, including those among the Jewish people in the Diaspora, are known to live in most nation-states in the Western world, and in terms of international experience, the situation in Israel is not unique.

International law does not require nation-states to relinquish their national character, but at the same time stands for the right of national minorities to preserve and cultivate their unique identity through language studies, cultural autonomy and through religious services guaranteed in equal measure to services provided to the majority group. It is therefore essential that the court referred to Section 4 of the Nationality Law, which enshrines the existence of the Hebrew language as the main language of the state, and ruled that this does not detract from the status of the Arabic language in the state.

It is important to remember that preserving the rights of national minorities in Israel is also essential for strengthening the position of Jewish communities in the Diaspora.

Jewish communities around the world expect the authorities to respect their rights as minority groups, and we, along with other international Jewish organizations, monitor this regularly and systematically.

As director general of an international Jewish organization that supports the strengthening of ties between Diaspora Jewry and the State of Israel, I believe it is especially important to emphasize the intention of Israeli legislators to continue to strengthen the concept inherent in the law.

According to the court ruling, the Nationality Law is the Basic Law that declaratively states that the principle of equality between the Jewish character and the democratic character of the State of Israel is part of the emerging state constitution and in the same breath declares the State of Israel’s commitment to the fate of all Jewish people. This is the reciprocity that exists between the Jews living in Israel and those outside it.

This is a vital message to all systems in the State of Israel and to Jewish communities in the Diaspora. 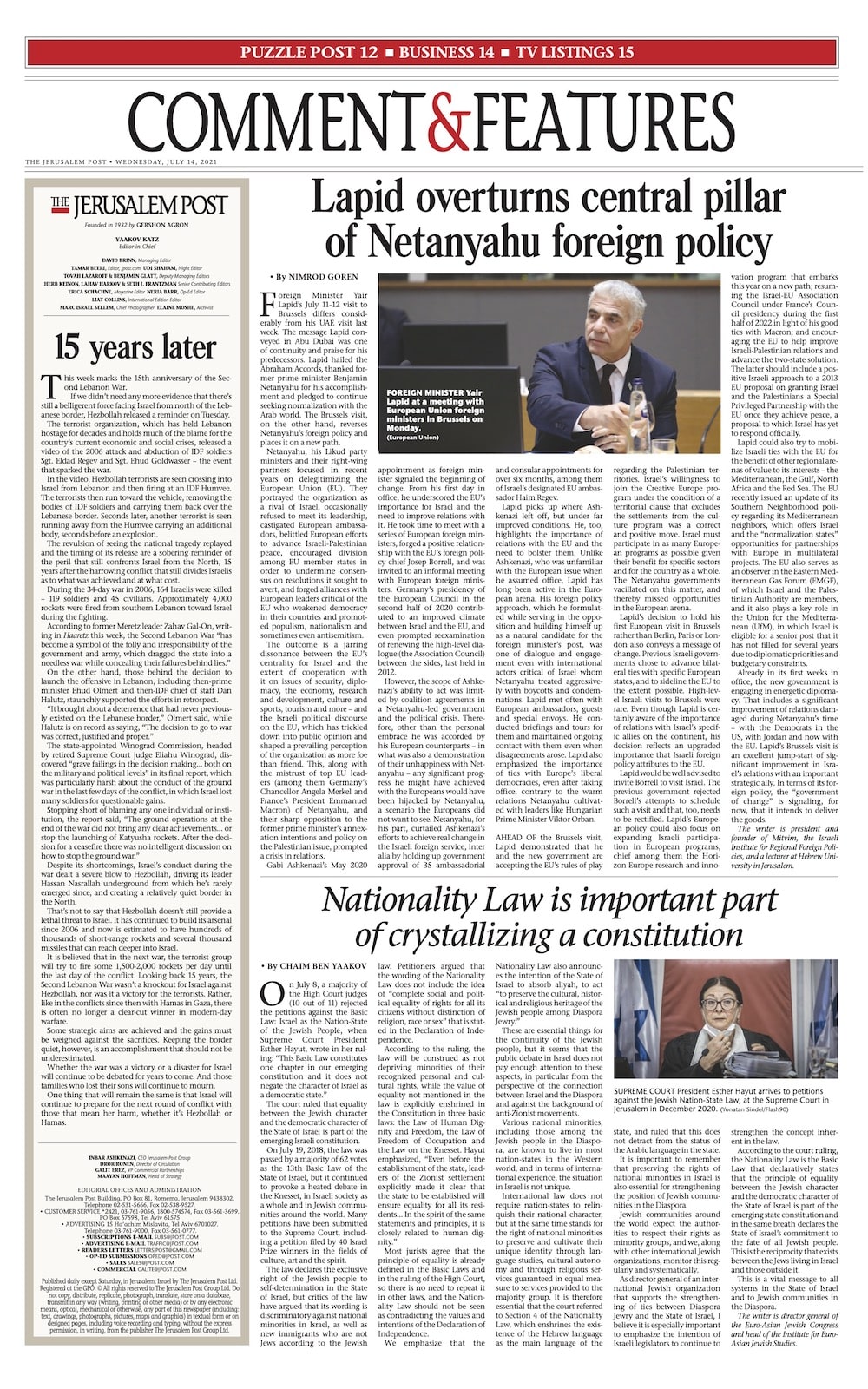