After almost three-quarters of a century, it’s time for us to recognize that our state is no longer just a local power – we must venture further and consider our impact on the whole world.

“To say the least, at the moment our chances are very weak. To be more frank, we have to admit that the enemy has a huge advantage,” assessed Israel’s chances Yigael Yadin, the commander of Haganah operations at the time and the forthcoming IDF chief of staff. According to Ben-Gurion, these words were heard at a meeting on May 12th, two days before the historic declaration of independence.

Israel’s Independence Day in our modern perception is certainly one of the most important and happiest days in Jewish history. However, it was shrouded in extremely complex emotions of the Israeli leaders. The War of Independence began long before that day. By May 1948, the hardest battles were already going on throughout the country. Jerusalem was under heavy siege. The day before the proclamation, on May 13th, four kibbutzim of Gush Etzion fell, to be revived only decades later. After the proclamation, the war broke out with renewed vigor, on several fronts, and the first weeks of the new Jewish state turned out to be maybe the most complicated, if not decisive. The final ceasefire agreement was signed only in the summer of 1949.

Despite the dire forecasts, Israel heroically withstood this war and everything that happened after – 74 years full of events, victories and successes, as they say – is already a history.

In light of recent events, Israel has received a fair amount of criticism in the world press and social media regarding its position. However, in this criticism, if it does not turn into explicitly anti-Semitiс comments, there is also a very important, positive grain for us. Our opinion and our position are important to the world and to the Jewish communities. Today, we, as a state, are expected to be a full-fledged participant in the global processes.

We still live in a complex region, fundamentalist ideologies of hatred towards the Jewish state are still strong. Even after 74 years Israel is still forced to face existential threats, all the same fears of society and leadership. However, if at the beginning our ‘newborn’ state had to literally fight for its existence and solve many internal problems, today Israel is no longer just a local force – we have to think and act globally.

Technology is certainly a part of this process – a sector that has allowed the small Jewish state to become one of the leading economic forces and gained us an international status. The role of the innovation sector in the Israeli economy can be described just by one fact: since the beginning of 2022, 20 new so-called “unicorn” companies, private start-ups valued at over a billion dollars, have appeared in Israel. In total, there are more than 60 such companies in the country – the second place in the world after the United States. 6,400 start-ups per capita provide the highest density of innovative business in the world.

In peace and security, Israel is ready to cooperate and share its technologies. And now other countries of the Middle East are coming to realize the importance of scientific and technological exchange and business partnership in the first place. The recently signed Abraham Accords have already led to an unprecedented level of Israeli cooperation with the Gulf countries. Watergen company, which I run, is part of this process. We are working with partners in the United Arab Emirates to address water scarcity and food security in our region together.

Our devices, that can produce clean, fresh drinking water from the moisture in the air, are already operating in 85 countries around the world. We are especially proud that several of them have been installed even in the Gaza Strip, where almost two million people suffer from a severe shortage of clean drinking water. Watergen was the only company to work with the Israel Defense Forces and local partners to install dozens of its devices in Gaza. They are connected to solar panels and located in hospitals and other healthcare organizations.

Throughout history, wars have often been waged over water resources. Today we are doing just the opposite – we are making peace and building a common future with help of water technologies.

Hundreds of companies in Israel today continue to build the image of our state as a world technological power with the mission to improve this world and the quality of life in it. Politically we have to be on the same page.

We have a lot of issues and challenges, but every time looking back, it’s hard to believe what an incredible path we have overcome over the past 74 years.

I heartily congratulate the State of Israel, its citizens, as well as all the Jews in the Diaspora on this common holiday for the entire Jewish people! 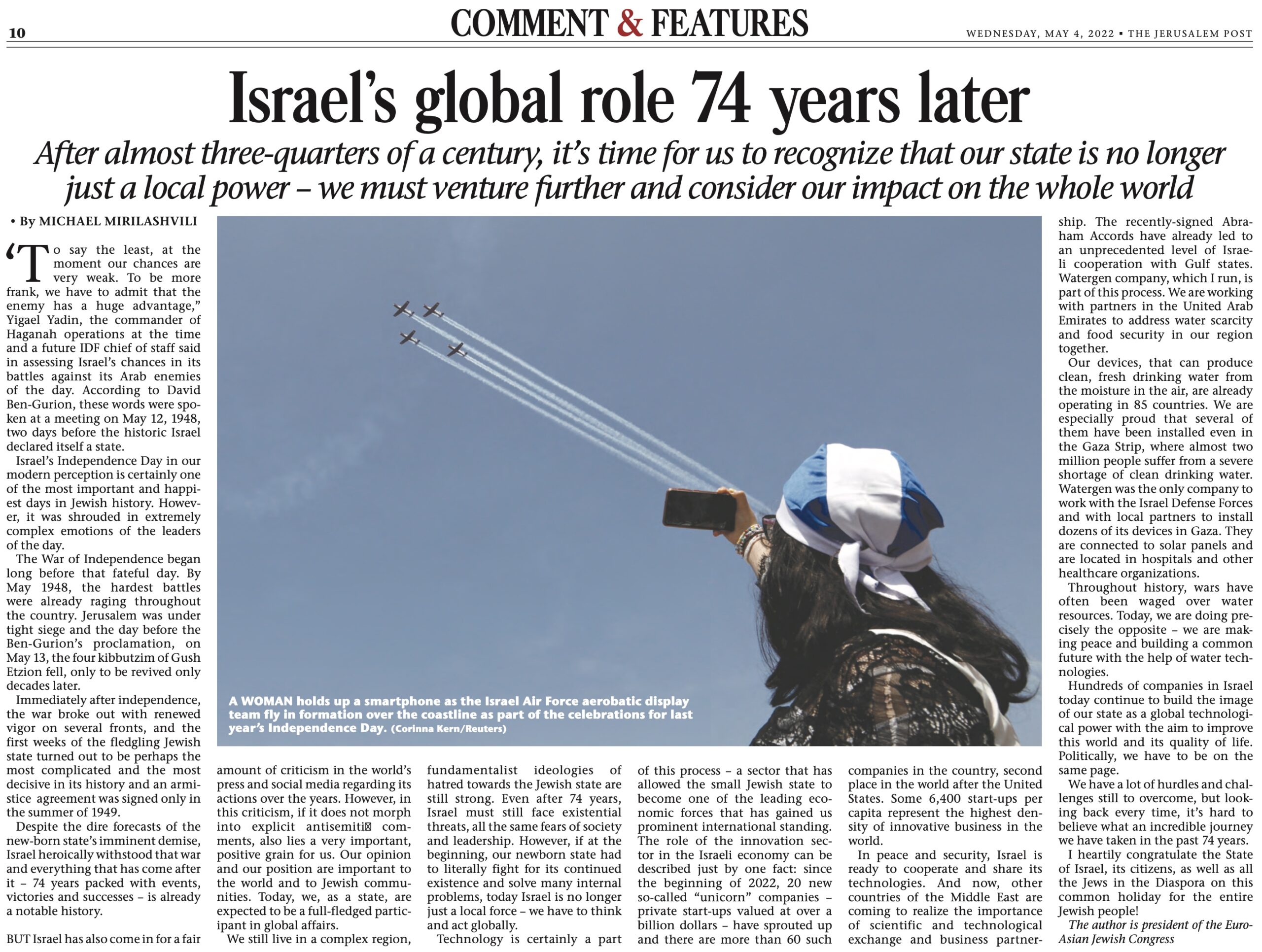