Jewish communities of the Euro-Asian region and EAJC member organizations paid tribute to the victims of the Holocaust with commemorative events dedicated to International Holocaust Remembrance Day and the 75th anniversary of the liberation of the Auschwitz death camp.

The Jewish community of the Philippine, which recently has joined the Euro-Asian Jewish Congress, held a memorial candle lighting ceremony at Philippine Women’s University. Attended the ceremony were ambassadors of seven states. It worths recalling that the Philippines is the only country in the world that has been actively involved in rescuing Jews during the Holocaust.

The Jewish community of Armenia dedicated the ceremony at the Holocaust monument to the 75th anniversary of the liberation of Auschwitz and International Holocaust Remembrance Day. The ceremony was attended by government representatives of the Republic of Armenia, leaders of the Armenian national communities, French Ambassador of Armenia, Jonathan Lakot, the representative of the Russian Embassy in Armenia, local press, and others.

An event dedicated to the International Holocaust Remembrance Day and the 75th anniversary of the liberation of the Auschwitz death camp, organized by the Mitsva Association of Jewish National Organizations of Kazakhstan, the EAJC representative office in Central Asia, and UN Information Office, was held in Almaty. World War II veterans, leaders of ethno-cultural associations, representatives of international diplomatic circles and religious confessions, civic activists, students gathered to pay a tribute to the Holocaust victims.

This is the fourth meeting in the framework of a joint project of the student union and the organization of former prisoners aimed at preserving historical memory and combating Holocaust denial.

The Hillel Russia educational events, dedicated to International Holocaust Remembrance Day and the 75th anniversary of the liberation of the Auschwitz death camp, were attended by young people from eight Russian cities. An exhibition “Auschwitz – a place on Earth” opened in the Khabarovsk synagogue; a meeting with Holocaust survivors was held in Penza; in Yekaterinburg, in collaboration with the local Jewish community, an evening of dramatic reading of Anne Frank’s diary was held; an evening in memory of the Holocaust victims was held in Novosibirsk; in St. Petersburg and Novosibirsk Shabbat Memorial service took place.

As part of the memorial events, on February 3, in Moscow, the Documentary Film Center and KARO.Art will present the premiere screening of the documentary “Anna Frank. Parallel Stories”, featuring the Academy Award winner, Hellen Mirren. The premiere is held with the information support of Hillel Russia, the Jewish Museum and the Center for Tolerance, and the Knizhniki publishing house.

The Jewish community of Montenegro and the EAJC representative office in Balkan region paid tribute to the Holocaust victim at a ceremony with the participation of community president, George Rachevichev; Minister for Human Rights and Minorities of Montenegro, Mehmet Zenk; Chief Rabbi of Montenegro, Ari Edelkopf; Deputy Head of the Israeli Embassy in Serbia and Montenegro, Mayan Ben Tour; ambassadors of Great Britain, Germany, and the United States, and other honorary guests.

The Committee on Human Rights and Freedoms and the Committee on Education, Science, Culture and Sports of Montenegro supported the initiative of the Jewish community of Montenegro and held a conference dedicated to the International Holocaust Remembrance Day and the 75th anniversary of the liberation of Auschwitz. Conference participants expressed their willingness to help educate young generations so that the Holocaust tragedy never repeats itself.

On January 27, in Belgrade, Minister Zoran Djordjevic hosted a ceremony dedicated to the International Holocaust Remembrance Day, at the site of the Sajmište concentration camp. Members of the Jewish community of Belgrade laid wreaths at the site Topovske Šupe, one of the first concentration camps for Jews and Roma in Europe, located close to the city center. The Jewish community also joined the memorial ceremony dedicated to the 78th anniversary of the Novi Sad Raid, remembering more than 1,300 Serbs, Jews, and Roma massacred there.

Educational classes, commemorative ceremonies, meetings, and webinars organized by the Kesher Project and aimed at preserving the memory of the Holocaust, were held in numerous cities in Belarus, Russia, and Ukraine. An online bridge, dedicated to International Holocaust Remembrance Day, brought together the Kesher Project activists and ORT students in Kiev, Vilnius, and Odessa.

In the framework of the youth project “Women Art Challenger” on the occasion of Holocaust Remembrance Day, the religious organization of progressive Judaism of Tver presented the cartoon “Francesca”. In Gomel, an interactive exhibition “The Path of Remembrance”, based on Yad Vashem materials, has opened.

The traditional ceremony at the Jewish Community House in Tbilisi began with the lighting of six candles in memory of the Jews perished in the Holocaust. The ceremony was attended by the Israeli Ambassador to Georgia, Ran Gidor, representatives of the diplomatic corps of Poland, Germany, the USA, Lithuania, and Latvia as well as representatives of Jewish organizations and members of the Jewish community of Georgia.

Chairman of the Union of Jewish Communities of Georgia, Rafael Mesengiser, read Kaddish. Excerpts from documentaries about the Holocaust, prisoners’ letters, and Jewish songs and niggunnim performed by the Shir vocal studio from the Jewish Cultural and Educational Foundation reflected a vivid memory of the tragedy of the Jewish people. 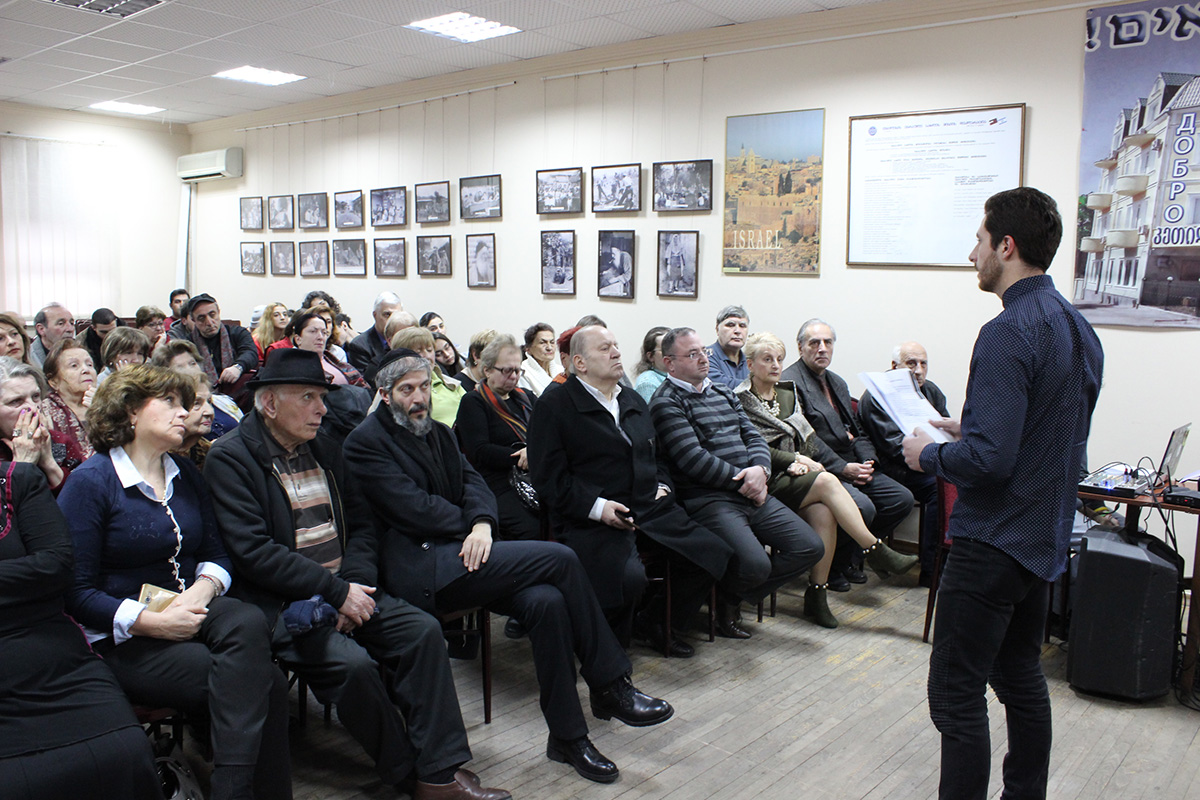