I’m grateful for the opportunity to speak here today. It is a moment when we must speak up more than ever in a hope that our voice will be heard.

And today we need to talk about peace. It’s not just a beautiful word. We say it too often, but sometimes we forget what it really stand for. Peace is a great respect for human life, freedom and opinions of others. It is a cooperation between people and nations. It is an exchange of ideas, scientific and technological progress. Peace is, first of all, humanity, mercy and the holiness of life.

It is exactly what Judaism has taught the Jewish people for centuries. If there is a cult in our tradition, it is the cult of love for human life. Moses in the book of Deuteronomy bluntly tells the Jewish people: between life and death – always choose life. For the sake of life and its salvation, we not only might, we are obliged to violate one of the most important commandments – the observance of Shabbat. In such case, the breach becomes compliance. These days, many were impressed by the photos taken on Shabbat, where religious Jews were sitting in front of a computer with their phones. One of them, Rabbi Zilberstein from Chernihiv, explained to his little daughter that G-d had given him a rare opportunity to save 65 lives. Even in the darkest time, there will always light.

Today is a dark time and we cannot but talk about Ukraine and its tragedy. A terrible humanitarian crisis, destroyed cities and fates, millions of refugees, complete uncertainty and loss…

According to various estimates, about 200,000 Jews and members of their families lived in Ukraine before the outbkreak of the war. Jewish life in Ukraine spans centuries. We know from a Jewish letter found in the Cairo Geniza that already in the 10th century Jews inhabited Kyiv. Many spiritual leaders of our people, rabbis, writers and politicians came from Ukraine.

Over the past 30 years, many Jewish communities have developed in large and small cities throughout the country: Kyiv, Odessa, Dnipro, Kharkiv, Zhytomyr, Chernihiv. Today they are at war. Today, the future of Jewish life there is in question.

Many Jews fled, someone, thank God, got to Israel and with God’s help will find a new home here. But many remained. And for sure, for many, life will never be the same. We hear calls for help from local rabbis and community leaders. Today, prayers in synagogues are much more passionate, and the doors are open to all those in need. A new reality is emerging and we must deal with it.

We have no right to stay aside. We, the global Jewish community and public figures, must do everything in our power to stop the bloodshed, human tragedy and bring peace closer. We have an obligation to help all those affected now and we will have to rebuild the Jewish communities later on.

For 30 years, the Euro-Asian Jewish Congress, in cooperation with the World Jewish Congress, has been taking care of the needs of the regional Jewish communities, and among them, of course, the communities of the former Soviet Union countries. We supported them in the most difficult times, we will support them now. Right away, we created a humanitarian aid fund for the Jews of Ukraine. We support them in their needs, we help the Jewish community of Moldova to accept and accommodate refugees. We facilitate the evacuation of people to Israel and help refugees in other European countries.

We believe and pray that soon the Jews of Ukraine will be able to return to their regular peaceful life, but until then it is our moral duty to unite around them, support them and help them out of trouble.

Once, the world Jewish community rallied around the fate of Soviet Jews. Then they were deprived of almost all rights, but after decades of state anti-Semitism of the USSR, in the post-Soviet countries, Jewish life truly flourished. Young democratic societies have realized that anti-Semitism is an outdated disease that must be fought with the strictest measures.

In recent years, we have seen a significant decrease in acts of violence motivated by anti-Semitism in the former Soviet Union countries. However, we have to be vigilant. After all, most anti-Semitic acts in the post-Soviet space are verbal: anti-Semitic judgments, the spread of conspiracy theories, denial or downplaying of the Holocaust.

Unfortunately, we already know that global crises always give rise to lots of anti-Semitic conspiracy theories. We saw this clearly during the pandemic, we see and note these phenomena now. We hope that the positive dynamics regarding anti-Semitism in the countries of the region will continue, but we are closely monitoring the situation and are ready to deal with potential threats.

Till today, some people allow themselves to express the opinion that the wars are unleashed by the Jews. But we, the Jewish people, know more than anyone else the price of the terrible wars of the past. We know exactly how precious and hardly achievable the peace is today. We know the specific price and the names of the people who died in the struggle for a peaceful existence of the Jewish people and the Jewish state. Every year in Israel for a week long we remind ourselves of this price. Starting with 6 million lives lost in the nightmares of the Holocaust to the 24,000 people who gave their lives for security of the Jewish State. The price is too high.

Modern Jewish State was raised by wars, but our main victories were achieved in peacetime. Science, education, technologies aimed at improving the quality of life and progress – these are the very priceless rewards of peace.

Modern Israel is one of the technological leaders in the world. It is a technological advance that has allowed the small Jewish state to become one of the leading forces in the region and the world. The role of the innovation sector in the Israeli economy can be described just by one fact: since the beginning of 2022, 20 new so-called “unicorn” companies, private start-ups valued at over a billion dollars, have appeared in Israel. In total, there are more than 60 such companies in the country – the second place in the world after the United States. 6,400 start-ups per capita provide the highest density of innovative business in the world.

In peace and security, Israel is ready to cooperate and share its technology. Along with the Euro-Asian Jewish Congress, I also lead the start-up companies Watergen and Vertical Field, aimed at solving the drinking water crisis and ensuring food security in the world’s most problematic regions.

‘Vertical Field’ Urban Farms is an innovative and affordable way to grow over 200 types of crops in any indoor or outdoor urban space. The crops, which grow to maturity within 21 days, can be easily planted and harvested, they are pesticide-free and grown on beds of nutrient-rich soil, providing everyone with nourishing, healthy, and natural food.

Watergen patented technology allows to produce clean, fresh drinking water from the moisture in the air without the need to connect to a water source. Our technology has been recognized by the Israeli Ministry of Economy as one of the 7 most innovative inventions in Israeli history.

And now the countries of the Middle East are coming to the same conclusion of cooperation and partnership importance. The recently signed Abraham Accords have already led to an unprecedented level of Israeli cooperation with the Gulf countries. And our company is part of this process. Together with our partners in the United Arab Emirates we are solving the problems of limited water resources in our region as well.

Our devices are already operating in 85 countries around the world. We are especially proud that several of them have been installed even in the Gaza Strip, where almost two million people suffer from a severe shortage of clean drinking water. Watergen was the only company to work with the Israel Defense Forces and local partners to install dozens of its devices in Gaza. They are connected to solar panels and located in hospitals and other healthcare organizations.

Throughout history, wars have often been waged over water resources. Today we are doing just the opposite – we are making peace and building a common future with help of water technologies.

I am convinced that most conflicts between people and states caused by the lack of modesty and the desire to impose one’s views, culture, and way of life on the opponent. But only true modesty, acceptance and the ability to recognize the right to a different view open the gates of understanding and mutual respect. It seems to me that, first of all, we have to admit our own mistakes and flaws, while striving to see the opponent’s advantages and strong sides. This is the essence of trust and respect, which open the way to solving the most tense problems and reaching a true peace. 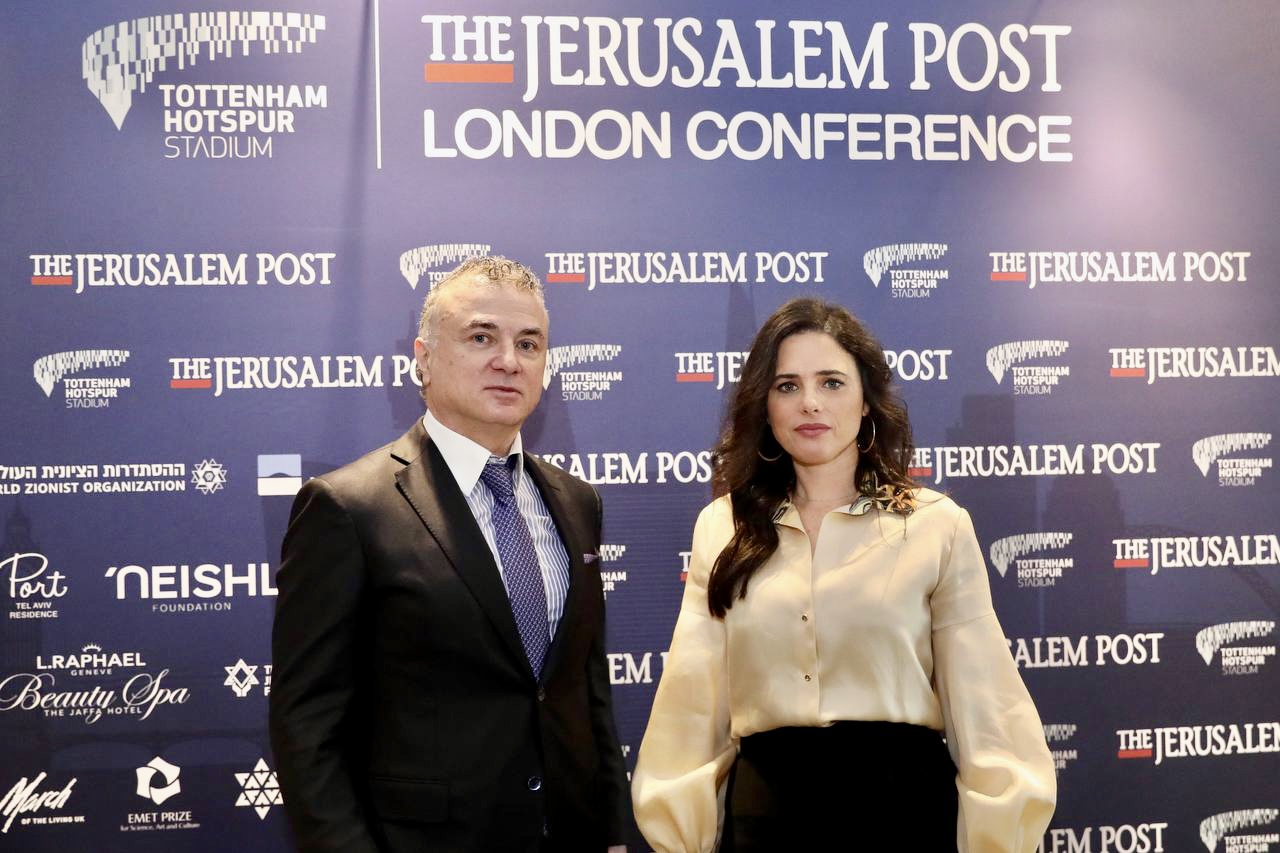